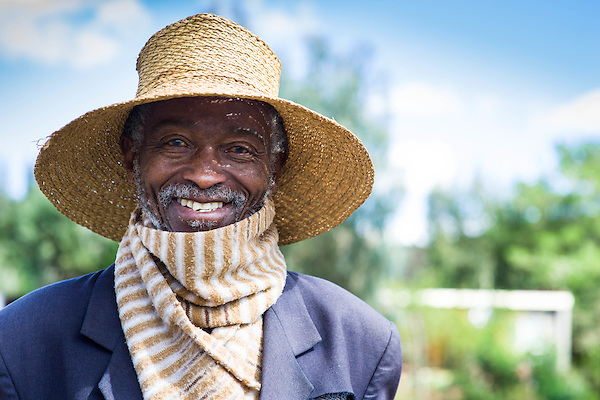 Lesotho is called “Kingdom in the Sky” for a reason. The entire county is located at high altitude – nowhere lower than 1,000 meters. While Lesotho is a landscape photographers dream with stunning mountain and valley vistas awaiting around every corner – I’m usually more inclined to photograph the people of the places I visit. Fortunately – the wonderful Basotho people are extremely friendly and accessible.

People and animals seem to be constantly on the move in Lesotho. “Where are you going?” was the question I most often got from the people I met on my way – not the typical “where are you from?”. Herdsmen are everywhere – walking their donkeys, horses, goats, sheep or cows to greener pastures or nearby markets – or anywhere else. The mandatory dress code for Basotho people seem to consist of a hat (any hat really), a colorful Basotho blanket, gumboots and a stick. Cows, sheep and goats all wear bells around their neck – providing a unique soundtrack to the stunning scenery.

Even in some of the most remote areas – people seem to emerge out of nowhere. I could stop somewhere on a steep mountain road to photograph a young man dressed in the traditional Basotho blanket – and immediately two other kids would show up to also have their photo’s taken. Three minutes later it was a group of eight – and suddenly a small gathering was becoming an event. This happened quite often.

The small rondavel style houses you see in most Lesotho villages are typically made from local materials – and with doors and windows painted in bright blue colors. While food is being prepared – thick smoke from all the fireplaces covers the entire village – giving it a dreamlike, hazy look. The village farmers work the small fields on the mountain side during the day – still plowing the field with oxen as it’s been done for centuries. Horses and donkeys are used as pack animals – dogs help manage the herds of mohair goats. As the sun is setting – herdsmen bring their animals back home to the house – where a low stone fence form a small circular cattle pen. Its very easy to get caught up in a romanticized picture of Lesotho – but there is no doubt that life in these villages are filled with hardship.

The roads – or rather the lack of roads where I went – made it a non-trivial 4×4 challenge. While modern paved roads are being built at a rapid pace – many areas of Lesotho are still only accessible through dirt tracks, forcing you to pass through water streams and over big rocks and boulders. Many of these mountain roads seem to have an almost vertical drop at the side. I can imagine that if the car rolls over it will be tumbling down the steep mountain side for a mile or so.

Sani Pass at almost 3,000 meters was a most interesting experience – not the least because that’s where I discovered I had ruptured my fuel tank on a sharp rock somewhere along the way. Petrol was rapidly pouring out – and with the nearest fuel station several hours drive away – initial panic started to set in as I was lying under the car using my finger to stop the flow of petrol. Luckily – a local Basotho man came to my rescue with a small screw and a piece of plastic which I could use to plug the gaping hole. Finally – with a bit of gaffer tape (never leave home without it) – the quick fix was sealed and I could relax with a cold Maluti beer at the highest bar in Africa.

From Moodboard to Billboard